“It’s all about ingredients and execution. That’s the equation for good cooking.” – Thomas Keller 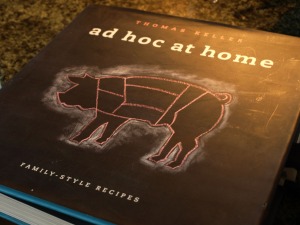 Ad Hoc at Home by Chef Thomas Keller was added to my collection of cookbooks at least three years ago. As sometimes does happen when I purchase a cookbook, it is primarily used as a picture book. I hover over the pages and simply gaze at the contents – more than I would ever actually use the recipes.

The first year that I owned this mega-volume, I made Whole Roasted Chicken on a Bed of Root Vegetables with Puree of Garlic Potatoes for visitors from London. It was fantastic. Since then, I have stared with longing at the Pomegranate Glazed Quail recipe, wondering if I would ever make it (or find quail at your average Rocky Mountain West grocery store). I made a mental note that I should try the lamb recipes someday, the Carmelized Sea Scallops, and a number of other suggestions that seemed both marvelous and time consuming.

I’ve read through the methodologies that Keller promotes; the proper use of vinegar, for instance, and instructions on how to braise. Really, this cookbook had morphed into a text book that I had not read all the way through, but that occasionally served as a reference manual. It was languishing on my bookshelf and going to waste.

My girlfriend Jenny recently asked to borrow it. Knowing it would go to good use in her kitchen, I happily complied. I told her that I’d always wanted to make Keller’s Buttermilk Fried Chicken (which is now sold as a kit at Williams-Sonoma) and released it from the shelf and into her hands. 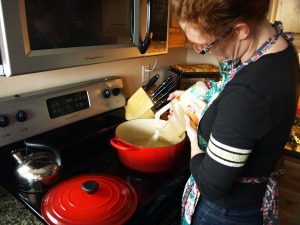 Many weeks later, I texted her to ask what she had used it for. Her response was not immediate, but when she finally did contact me, it was clear that she was putting together a full Keller plan. “Let’s pick a day to make fried chicken,” she said. Of course I happily agreed. But Jenny was embracing more from Ad Hoc than just fried chicken. “How about buttermilk biscuits?” she asked via text. My thumbs reacted quickly, “Sounds great!” A few more exchanges revealed that she intended to make Carrot Cake Cupcakes topped with Cream Cheese Frosting for dessert. We brainstormed on the vegetable – considering a Green Bean and Potato Salad, or Coleslaw. Finally, it was the Carmelized Savoy Cabbage that won. 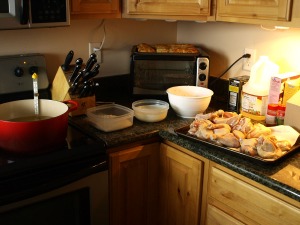 My friend was definitely taking on the most labor in this endeavor – and Jenny, a natural baker – would make short work of the biscuits and cupcakes. For my part, I was obliged to make Keller’s Melted Onions, a portion of which would be included in the cabbage dish. And if I made the onions, I had to make a sachet – my very first – containing garlic, thyme, peppercorns and a bay leaf.

I was attempting to bring the methods of a world-class chef into my own kitchen. It seemed almost silly. Maybe deep down, I had convinced myself that this was clearly not possible. The comprehensive volume that contained the approach to simple ingredients that had made Keller famous had been sitting unused on my shelf simply due to lack of courage.

Admittedly, the simplicity of his approach is the best part of Ad Hoc at Home. Anything in this book, whether it be a lamb dish, a salad, or a vinaigrette, is comprised of simple components. They come together to create flavors that satisfy. Keller’s love of the basics – herbs, salt, and butter – represent a vast world of possibility. The evidence can be found at the French Laundry, at Bouchon and its sister bakery. And here, in my own kitchen and my friend’s. 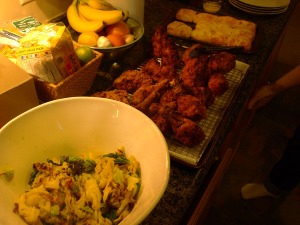 On the appointed day, we ate like kings. We reveled in the tastes, and could hardly get over how well it had all turned out. It seemed as if we were celebrating a holiday, but ultimately it was friendship and fine food that defined the celebration. This was a table of reverent cuisine that had been created by our own hands, and inspired by Chef Thomas Keller.